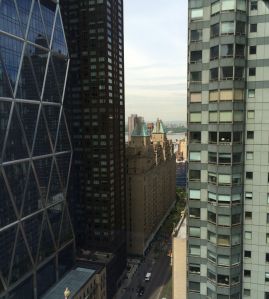 I started work at Fortune magazine in April 1996. Since then I’ve left New York a couple of times — to work in London in 2000-2001 and Boston from 2010 to 2013. But I have always come back, and all the time I’ve lived in New York, I have worked in pretty much the same place. First on an assortment of floors in the Time & Life Building at 1271 Avenue of the Americas, and since last summer less than a block away at 75 Rockefeller Plaza, the old Time Warner headquarters building, where HBR had its New York offices.

Those days are over. Time Warner’s lease is finally running out, and the occupants of 75 Rock are being kicked out so the building can be refurbished (it really needs it). So HBR‘s New York office is moving this week to 3 Columbus Circle, which is really at 1775 Broadway (a block south of Columbus Circle). It’s the old Newsweek building, and before that it was the GM building. It has recently been reclad in glass, rechristened, and readdressed. I’m a bit dubious of all the choices the developer made, but our office is really nice (the photo shows the view from my office window), and I’m excited about the new neighborhood. The subway commute will be shorter, and riding my bike to work through Central Park will be an option. There are lots of new restaurants and shops to be explored. And maybe I’ll actually go ice skating at lunch sometime at Wollman Rink. I never did at Rockefeller Center. Not once.

This little slice, part of the amuse bouche, was actually the least flavorful element of a spectacular meal consumed at Telepan last night. But it was made with Swiss chard, and therefore deserving of mention.

The highlight of the evening? Maybe when the sommelier described the wine he was pouring with Allison’s foie gras (yes, we’re evil) as “the veal stock” of whatever varietal it happened to be.

But back to the chard. I think the message here is that things go best when the chard stands alone. Well, not alone. Sauteed onions help.

No chard or services were received in exchange for this post.