This is the latest edition (mailed out Nov. 10) of my occasional e-mail newsletter, which you can subscribe to right here:

Food writing has always struck me as a field where the supply of talented people who want to get into it is much greater than the demand for its products, so the career prospects are especially iffy. My friend Jeff Gordinier has made a successful go of it after a mid-career switch away from music writing (a field with a similar labor-supply dynamic, come to think of it), but I harbor no dreams of following in his footsteps.

I am, however, obsessed with food, and constantly looking for ways to write about it that make sense for a purported business/economics journalist. These usually involve charts. Like this one: 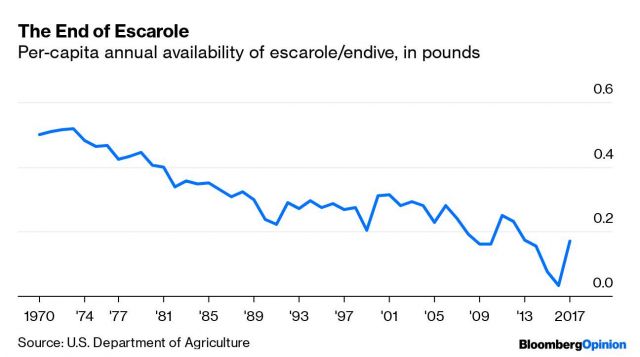 I tweeted this chart out in September while digging through the spreadsheets on per-capita food “availability” that the U.S. Department of Agriculture updates every summer. They’re compiled by taking estimates of food production, imports, exports and storage, then dividing what’s available for consumption in the U.S. by the population. So it’s not exactly consumption, but it’s close enough, and provides fascinating insight into American diets and American lives that for some foodstuffs is available back to 1909.

The main reason for escarole’s decline, I’m guessing, is that Italian-Americans assimilated and stopped sautéing and braising it and making soup out of it. It’s not as if Americans have stopped eating leafy greens in general. Spinach is always popular, hitting its all-time availability high (since 1970) in 2005, but not falling back all that much since. Iceberg lettuce has had a long fall and romaine/leaf lettuce a long rise, and are now available/consumed in roughly equal amounts. Kale has of course recently experienced a boomlet, although it is nowhere near catching up with spinach and the lettuces, and may have peaked. The numbers for collard greens and for mustard greens aren’t far below kale’s, and kale passed collards only in the past couple of years, demonstrating that there’s still some major regional variation in American eating. Personally, I’d be all for a national collards boom. I interrupted the writing of this email, in fact, to start cooking some collards with chopped-up shallot and smoked duck breast, red pepper flakes, chicken broth and white wine for Saturday lunch. This was a success.

Shockingly, I have yet to do a column on leafy greens. (If you have any tips or suggestions on that, please let me know.) I have used the USDA food availability data to write about “The Fall of Juice and the Rise of Fresh Fruit” and, in a column published today, “What Decades of (Sometimes Dodgy) Dietary Advice Made Us Do.” Other recent food-related columns include, “In the Future, We Will All Work in Food Service,” “The U.S. Is Growing More Corn Than It Can Handle” and “Are Burgers Really That Bad for the Climate?” The latter was an explanation and critique of a shocking statistic about beef’s climate impact from a New Yorker article on Impossible Foods.

What else have I written about? Well, it’s been a long time since the last one of these emails, so it’s been a lot of things. One disturbing discovery that I made while sorting through my columns since early July is how many have had “Trump” in the headline. American media coverage in general has been very Trump-centric for the past three-plus years, of course, but I had sort of prided myself on not getting caught up in that. No more: “Is It Trump’s Economy or Not?” “The Secret to the Trump Economy? More Government Spending,” “Trump’s Economy Is Plagued by Even More Uncertainty Than Obama’s,” “Trump’s Bungling a Good (Yes, Good) Policy,” “At the G7, Trump Is One of the Popular Ones,” “Trump Is Driving Women Into Law School,” “The International Student Slump Isn’t Just About Trump,” “A Decline in RV Sales Is Bad News for Trump,” and “This Measure Says Growth Is Slower Under Trump Than Obama.”

A couple of these (the RV one, for example, which involved an actual visit to the RV/MH Hall of Fame and Museum in Elkhart, Indiana) barely mentioned the president, but in general the headlines are accurate reflections of the contents. I don’t know what to say, other than that I promise to do better.

A selection of other recent writing follows. I realize the non-subscribers among you will run up against the Bloomberg paywall meter before long, especially since we’ve gone from giving everybody 10 free articles a month to “a dynamic paywall based on 22 criteria,” so I’ve only picked a few that I’m especially proud of. Also, if you’d prefer to run up against the New York Times paywall instead, here’s a book review I wrote of Binyamin Appelbaum’s The Economists’ Hour and Janek Wasserman’s The Marginal Revolutionaries.

Economy: “Economic Growth Rates Look Almost Medieval,” “Most Canadians Are Now Better Off Than Most Americans,” “The Mancession Is Finally Over​.”

Business: “How Bowling Alleys Made a Comeback,” “The New York City Retail Apocalypse That Wasn’t​.”

Environment: “Cities Are Good for the Environment, But Many City Dwellers Aren’t,” “Climate Change Definitely Probably Caused This Heat Wave.”

Other things: “‘Broken Windows’ Theory Was Right … About the Windows​,” “American Exceptionalism Is About Being Self-Critical, Not Perfect” (an essay about the Massachusetts Bay Colony and its legacy based on one new history and one newish one), “The Amtrak That Works, and the Amtrak That Doesn’t​.”

This last column, written in July after a delay-plagued trip across the country in the California Zephyr and the Lakeshore Limited, got so much blowback from partisans of Amtrak’s long-distance services (one of whom is my wife) that I’ve been studying up for a second look. The added research may not change my views much, but it will involve attending my first Congressional hearing in decades next week, so that’s something to look forward to.