My former Fortune colleague Joe Nocera had a nice, long column about efficient market theory in today's New York Times. It gave pretty good play to my book. A sample:

I couldn’t help thinking about Mr. Grantham’s screed as I was
reading Justin Fox’s new book, “The Myth of The Rational Market,” an
engaging history of what might be called the rise and fall of the
efficient market hypothesis.

Mr. Fox is a business columnist for Time
magazine (and a former colleague of mine) who has long been interested
in academic finance. His thesis, essentially, is that the efficient
marketeers were originally on to a good idea. But sealed off in their
academic cocoons — and writing papers in their mathematical jargon —
they developed an internal logic quite divorced from market realities.
It took a new group of young economists, the behavioralists, to nudge
the profession back toward reality.

Mr. Fox argues, echoing Mr.
Grantham, that the efficient market hypothesis played an outsize role
in shaping how the country thought and acted in the last 30-plus years.
But Mr. Fox parts company with him by also arguing that the effect
wasn’t necessarily all bad. As for the question of whether an academic
theory hatched in Chicago led to the financial crisis, suffice it to
say that some questions can never be answered definitively. Which isn’t
to say they shouldn’t be asked.

There's more. And it's a really good column. So check it out.

Anyway, the column went up online last night. I knew it was coming, so I checked the NYT Website every half hour or so until it showed up. I also checked my Amazon.com ranking a couple of times. It was in 5,000-6,000 territory.

This morning we checked Amazon again (my wife and son do most of the checking). The book was on the move. It broke 1,000 around midday. Right now it's at 289—and it's not on sale yet. I'd say Joe writes an influential column. 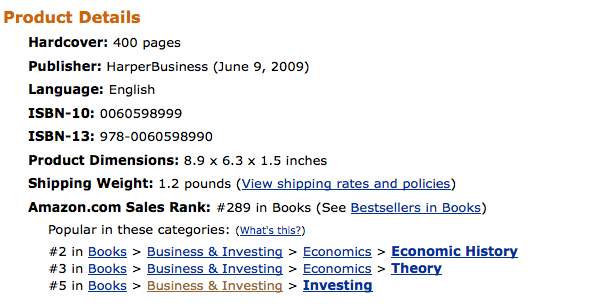