This is a sea robin. At least, that’s what Captain Rick called it last Friday. A friend who stopped by as I was getting ready to cook it said that, when she fished off Shelter Island as a kid, her dad referred to such things as “garbage fish.”

Rick sells lots of perfectly normal fish (filets of tuna, flounder, etc.) at his stand at the 97th Street Greenmarket. But that kind of stuff costs real money, and is kinda boring, so I’m usually drawn to his little bin of whole fish. I’ve bought lots of excellent porgies from him, and the week before I had gone for the butterfish. This time the weirdest thing in the bin was the sea robin, so I bought it. For $5. 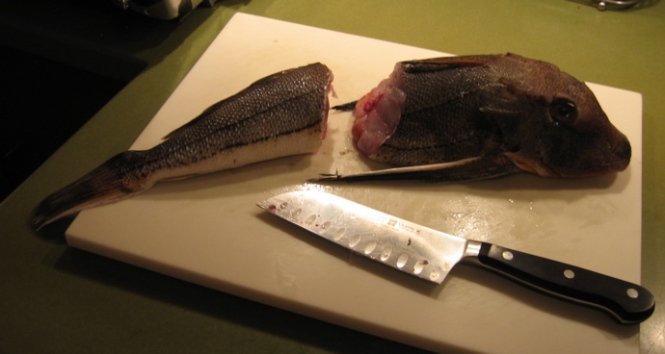 I then followed a recipe for monkfish tail in the no-longer-All-New Joy of Cooking (1997 edition), stuffing the thing with chopped garlic and basil and Maldon salt: 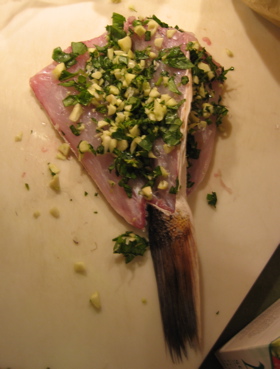 I roasted it at 450 degrees, initially just with oil and then with some Vinho Verde thrown in.

I think the fish might taste fine in a thick, creamy sauce. A sea robin etouffee. Except that it’s got lots of little bones which would make such treatment difficult. So this week it’s back to porgies or butterfish. Or maybe even tuna.

Someday soon, I hope, my digital media empire will consist of the Curious Capitalist at Time.com, a site/blog (probably at this address) promoting my book, and a food blog produced with others (I’m talking about you, Gina). But I haven’t gotten around to making that happen yet. Which means this still doubles as a food blog, because I think posting recipes on my Time.com blog would be just too self-indulgent.

And since I cooked butterfish for the first time Friday night, it seems imperative that I share the experience here. I bought them from Captain Rick, who catches fish off the Hamptons and sells them at, among other places, the Friday Greenmarket on 97th Street between Amsterdam and Columbus. He sold me six of the little things (for $4, I think) and told me to “lance” them. I took that to be a euphemism for cleaning them, which is itself a euphemism for pulling their guts and organs out. But it was an easy enough process with the little butterfish that I guess lance is as good a word for it as any. Anyway, here they are, post-lancing: 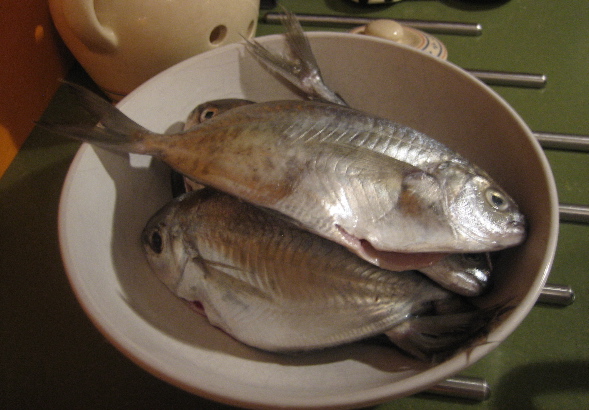 And here they are a couple minutes later frying in peanut oil: 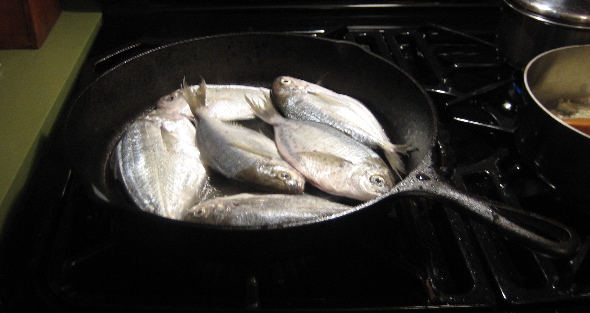 Cooking them in a cast-iron skillet was a mistake. I figured it was the best alternative to teflon, which I don’t really like to use plus our one teflon pan is too small for six butterfish anyway. But the skins came right off the fish and bonded in a deep and lasting way with the cast iron. (I was able to get them off eventually, but it took a whole lotta scrubbing.) Here’s what the fish looked like afterwards: 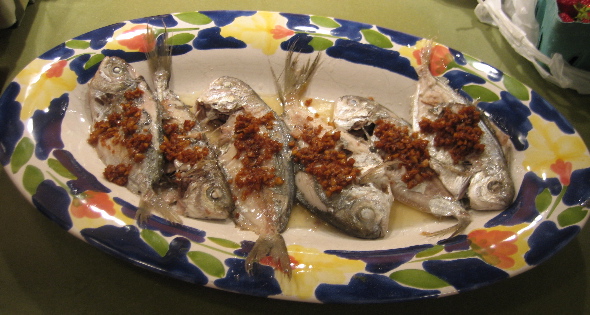 The garnish was chopped garlic and ginger fried in a little peanut oil, to which I added some toasted sesame oil and soy sauce after the the frying was done. When I first tasted the fish in the pan I wondered if maybe the garnish was overkill, because the fish really did taste like butter. But after eating a couple of the things I wanted all the flavor I could get because eating plain butter is actually kind of boring. All in all it was a big success, except perhaps esthetically. Oh, and those fish have an awful lot of tiny bones.

Captain Rick also talked me into buying a couple pounds of sand shark filets. When I announced this at the P.S. 163 book sale down the sidewalk, somebody asked, “land shark?” The name stuck.

I kept the land-shark-prep pretty simple. I just rubbed some oil and salt and pepper on it, broiled it, then served it with anchovy butter. It’s really rich, and we could have done with far less fish for three adults and a kid. So on Sunday I made myself shark salad out of the leftovers. It was okay, but there’s a reason why you can’t buy cans of Wolverine of the Sea at the supermarket: Shark doesn’t make nearly as good a salad as tuna does.