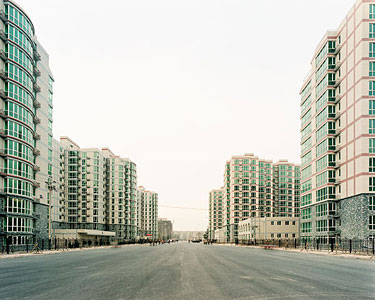 Went to the opening tonight at the Yossi Milo Gallery of an exhibit of photos of urban China taken by Sze Tsung Leong. They’re part of a series called History Images, which is also coming out as a coffee-table book.

The pictures, shot with a large-format (4″ by 5″ film) camera and printed really big, are breathtaking. They show sterile new neighborhoods going up and atmospheric old ones going down, but bring out a certain geometric beauty even in the new stuff.

There was much tut-tutting among the people around me at the show about China’s disregard for its history. Sze Tsung himself was less judgmental. The impression I got from talking to him is that he was out to document the transformation, not condemn it.

It’s interesting how people in the U.S., a nation that displayed utter disdain for its architectural heritage until about 30 years ago, now get all huffy about destruction of the past in China. Maybe we’re just trying to share the hard lessons we’ve learned (if only we could have the old Penn Station back!). But in Beijing in particular, it’s hard to see what else the Chinese are supposed to do. The traditional architecture of the city is of one-story “hutongs” built around courtyards. They’re charming, but utterly impractical for a city of 15 million people. (For one thing, you need higher density for public transit to work.) So most are being torn down and replaced with apartment buildings. Is that really such a horrible thing?

Some of the hutongs in the center of Beijing, near the Forbidden City, will survive as a sort of urban theme park. Many are occupied by well-connected government officials, an effective (if corrupt) way of ensuring that they won’t be torn down.