Update: The drought is over, but I’m still writing about water in California, so I’ll keep adding links to columns here.

California is in a really bad drought. Central Valley farmers are responsible for the bulk of the state’s water use. I grew up in a suburb of San Francisco, and have fond memories of the short-but-fierce 1976-77 drought, during which I was allowed to go for weeks without showering to save water (I went swimming in the pool every day instead). Then my first real job out of college was as the farm and business reporter for the newspaper in the San Joaquin Valley farming metropolis of Tulare. I was there for a year during the 1985-1991 drought, and wrote a lot about irrigation.

So I already knew a few things about California water issues and agriculture. And since April [2015], when I was inspired by a Joe Weisenthal tweet to write about the new phenomenon of #almondshaming, I have been learning a lot more, and writing about what I’ve learned for Bloomberg View. Here are my California water columns, in reverse chronological order. I’ll keep adding the new ones as I write more.

But first, a photo I took in May of San Luis Reservoir, the giant off-stream holding pond in the hills between Los Banos and Gilroy where water from Northern California loiters before being released southward down the California Aqueduct: 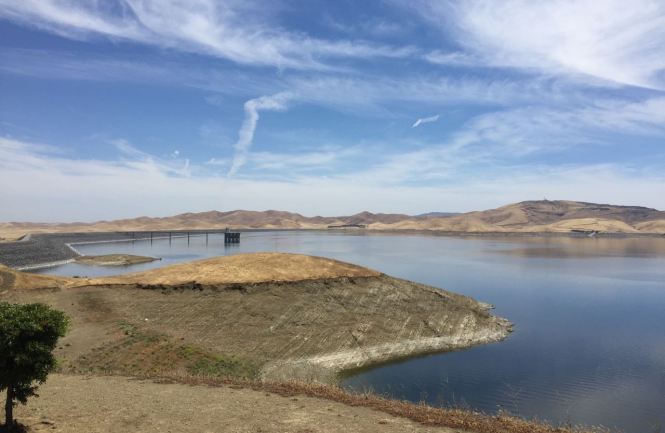 The Dried-Up Heart of California’s Water Dilemma, April 26, 2017. The story of the Tulare Lake basin, the former marshland that is now the world’s most productive agricultural region — and California’s biggest consumer of water.

California Tries to Refill Its Biggest Reservoir, April 18, 2017. California’s reservoirs are filling up. Its crucial snowpack “reservoir” is, despite what I wrote in my previous column on California water, pretty full this year too. Which leaves the state’s overtaxed groundwater basins. Fill ’em up!

California’s Snow Is Turning to Rain, January 5, 2017. There’s no sign that California has been getting any drier over the past century. But it’s definitely getting warmer, which has some not-so-great consequences for the state’s water-storage and -delivery system.

There’s No Such Thing as Normal in California Water, February 4, 2016. A lot of rain and snow falls on California. It is just not evenly distributed. The disparities are partly geographic and partly temporal — year-to-year and even day-to-day variance in precipitation is greater in California than anywhere else in the U.S.

You Don’t Drink Treated Sewage? Gross! July 29, 2015. In Orange County, twice-treated sewage that percolates into the groundwater has become a clean, reliable, indispensable water source. Other urban areas should be doing this too.

Don’t Blame Fish for California’s Water Shortage, July 13, 2015. Letting water flow through the Sacramento-San Joaquin Delta and out to sea is essential to keeping California’s water supply system working. Without the outflows, salt water would intrude and contaminate the supply.

Let Data Centers Have Their Water, June 30, 2015. The data centers that keep the cloud aloft use more than 100 billion gallons of California water a year to stay cool. That’s about 0.8% of the water used by farms, families and businesses in the state each other — not nothing, but not a major factor in the state’s water troubles either.

Why California Needs Thirsty Alfalfa, May 26, 2015. Explaining why farmers grow what they do in the Central Valley, with help from 19th century cattle magnate Henry Miller — and his great-great and great-great-great grandsons, who now farm 10,500 acres of tomatoes, cotton, alfalfa, melons, future Corn Nuts, and wheat northeast of Los Banos.

Rice Gets a Bath Amid California’s Drought, May 15, 2015. Yes, they grow rice in California — hundreds of thousands of acres, flooded in five inches of water. This happens mostly in a few counties north of Sacramento with great water right, and the birds who fly through the Sacramento Valley love it, so hardly anybody’s complaining.

Greedy Environment Steals California’s Water, May 5, 2015. Farmers and their friends in California like to say that 50% of the state’s water supplies are diverted for environmental uses. This isn’t exactly wrong — the statistic comes straight from the state Department of Water Resources. But most of the water they’re talking about flows into the ocean from a few rivers in the very wet northwestern corner of the state that are separated from Central Valley farm country by rugged mountains.

Jerry Brown, Water-Tunnel Salesman, May 1, 2015. The story behind the governor’s plans to bypass the Delta with two 40-foot-wide, 35-mile-long tunnels. It’s the modern version of the Peripheral Canal, and it may actually be a good idea.

Draining California’s Water Savings Account, April 29, 2015. Most of the farmers dependent on the federal Central Valley Project will be getting no irrigation water at all this summer. So why is the valley so green? Farmers whose water rights predate the CVP and the State Water Project are still getting lots of water — if less than normal. And everybody else is pumping it out of the ground.

William Shatner’s California Pipe Dream, April 27, 2015. Captain Kirk, who owns a ranch in the San Joaquin Valley, wants to start a Kickstarter campaign to raise $30 billion for a water pipeline from Seattle to California. His plan is just the latest — and probably least-well-thought-out — in a series of such proposals over the past century. Yet since the 1970s, none of them has gone anywhere.

Cows Suck Up More Water Than Almonds, April 13, 2015. Almond growers have been getting all the (negative) attention lately, but California’s dairy farmers and cattle ranchers are responsible for more of the state’s water use than any other agricultural sector. Still, almonds are pretty high on the water-use list. As is rice.

Farmers Use Water. Get Over It, April 9, 2015. Yes, agriculture accounts for about 80% of California’s water use and 2% of its gross domestic product. That’s a lot of water use for a relatively small amount of economic output, and it’s worthy of scrutiny. But it is not per se a misuse of resources. Water is an essential input for farming in a way that it isn’t for most other industries.

Amid a Drought, Cue the Almond Shaming, April 7, 2015. The California drought has made almond growers into symbols of agricultural power and waste. Which is interesting, given that the state’s almond boom has been in part a reaction to policy changes -— among them higher water prices — imposed during a previous drought.