I never knowingly ate a rutabaga before we moved to London in 2000. The sometimes-giant root vegetables — most likely a hybrid of a cabbage and a turnip — are called “swedes” in the British isles. The Swedes themselves apparently call them “rotabagge” or “rotbagge,” meaning something like “root lump.”

Not a glamorous name! And not a glamorous vegetable. Jane Grigson, my chief authority on English cuisine (and one of the most entertaining cookbook authors ever), wrote of the swede that:

As a vehicle for butter, with haggis and whisky, it is exactly right. But after a north country upbringing, I conclude that otherwise swede is a vegetable to be avoided.

My first experience in cooking a swede came after reading a newspaper article (I’m thinking it was in the Observer) that recommended grating one along with a few other former roots (carrots, maybe potatoes) and frying them up in a patty as a way to get the kids to eat their vegetables.

That wasn’t a big success — it tasted fine, but the kid (who was one or two at the time) didn’t really like it, and making and frying the patties was a lot of work. Over the past couple of years, though, I have developed an easier variant that has become one of my favorite winter dishes. All you need are a rutabaga/swede and a few of the only other vegetables you’ll find on sale at a New York farmers’ market in winter and early spring.

I usually go with a parsnip, a sweet potato and all or part of an onion:

The rutabaga has to be peeled, and the skin is so thick that I use a knife instead of a peeler. I also peel the parsnip and the onion, but just scrub the sweet potato. Then I chop 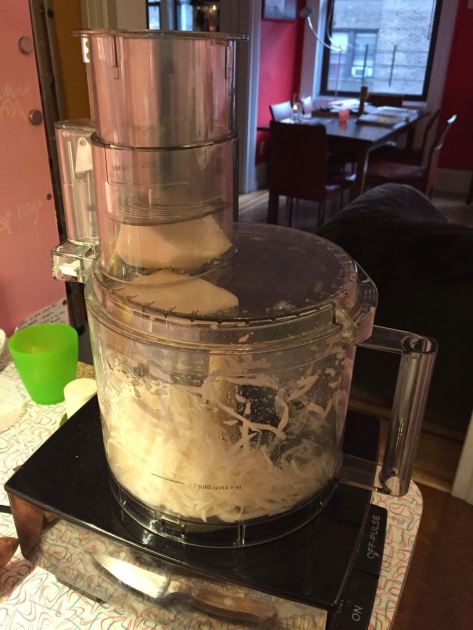 everything into big chunks that go into a food processor with a shredding-disc attachment.

When everything’s shredded, I spread it out on a cookie sheet onto which I’ve already drizzled a tablespoon or two of olive oil. Then I put it in the oven.

How hot an oven? I haven’t really settled on a temperature. When I’m already roasting kale at 275 degrees, I cook the rutabaga mix at that temperature and it comes out really well, although it takes forever (two hours plus).

But it also works at 400 degrees if you keep an eye on it and mix it around frequently. As I write this I’ve got a batch cooking at 333 degrees, a temperature that allows me to step away and blog about cooking rutabagas while cooking rutabagas, but requires that I go back and toss them around every ten minutes.

In any case, the idea is for your root vegetables to start out like this: 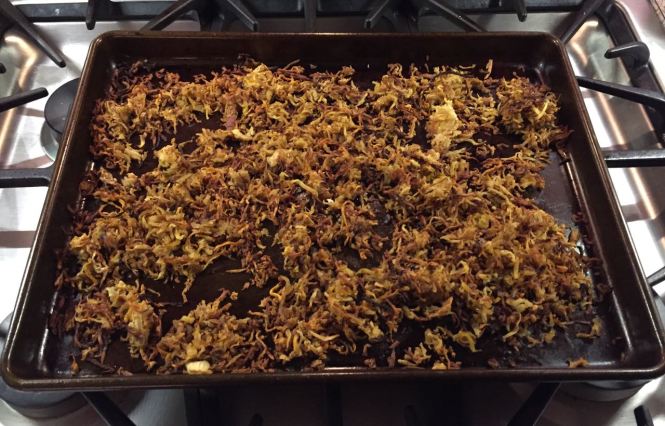 Along the way I add two or three tablespoons of butter and a pinch or three of salt. On occasion I have added a lot more butter than that. It certainly didn’t make things worse (rutabaga is a “vehicle for butter,” after all), but the returns seem to be diminishing. Also, I’ve cooked it with just olive oil and that’s fine too.

As for seasonings, I imagine there are herbs or spices that could work, but the nutty, slightly sweet flavor of the rutabaga and friends is so appealing that you really don’t want to mask it. Also, this tastes pretty good even if you don’t cook it to the level of crispy wonderfulness depicted above. But it’s not as crispily wonderful, of course.

I usually serve this in place of rice or potatoes at dinner. The nutrition info at left is for rutabaga that isn’t slathered with butter and salt. But still: look at all that Vitamin C! This is how Swedes avoided scurvy back in the day, apparently. And it’s more interesting than rice or potatoes.

The best part comes in the morning. Warmed up, these make for spectacular hash browns. I usually just put some in a bowl, microwave it for 30 seconds — with a little butter, of course — and drop an over-easy egg on top. A couple drops of Cholula sauce, and you have a Swedish-Mexican-English-American delicacy.